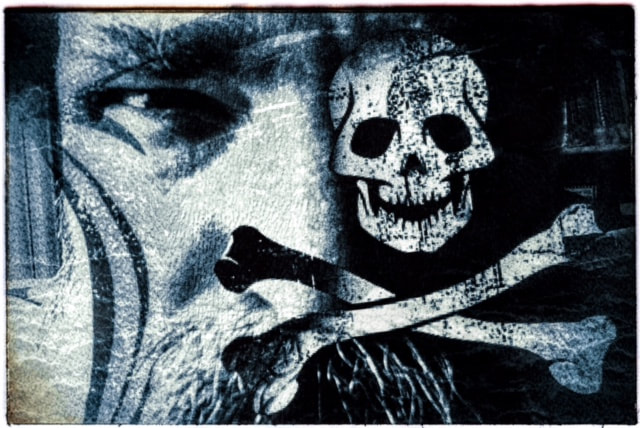 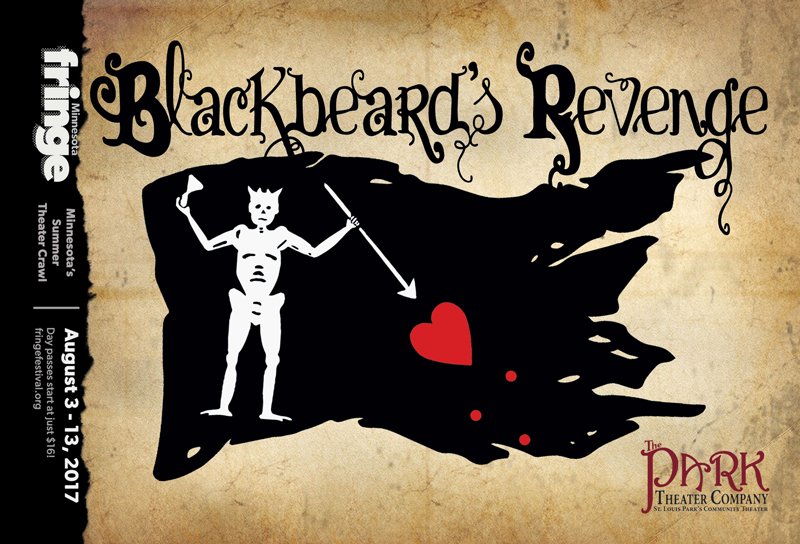 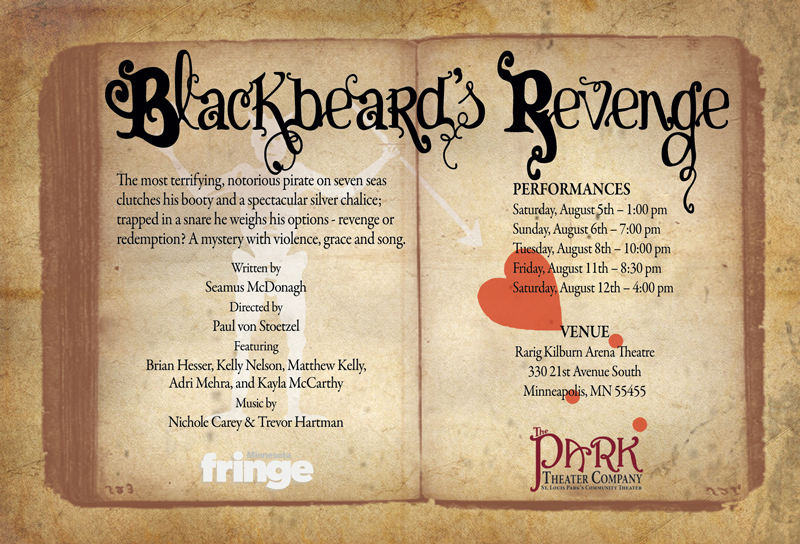 Inspired by a life-long fascination, playwright Seamus McDonagh of The Park Theater Company has created"Blackbeard's Revenge" an alternative interpretation of the most notorious and infamous brigand from the Golden Age of Piracy. The play is based upon historical accounts including the presence of a splendid silver cup in the ship's manifest of the "Queen Anne's Revenge". This world premiere is being directed by Paul von Stoetzel.
Blackbeard’s Revenge
Cast & Crew
Brian Hesser
Blackbeard/Fight Coordinator
Brian received a B.A. in Theatre Arts from Ausburg College. For the past 15 years, he has worked with a plethora of Twin Cities theater companies as an Actor, Fight Choreographer, Scenic Designer, TD Director, Teaching Artist, and Volunteer. He serves as Technical Director for nimbus. This is his second production with The Park Theater Company, previously appearing in TPTC's "Tales of Woe: Edgar Allen Poe" in 2009.

Kelly Nelson
Mary Ormand
Kelly is very geeked and grateful to be part of this Fringe production. Classically trained in theatre arts and dance performance from Minnesota State University of Moorhead, Kelly has been lucky to have worked for numerous companies around the Twin Cities in the last several years. Companies include: the Guthrie, Theatre Coup d'Etat, Artistry, Fox in a Box Productions, WAR theatre, Candid theatre, Black Market Theatre, as well as many others. She would like to thank you and everyone else that helped her get here. Enjoy the show!

Matthew Kelly
Israel Hands
Matthew is co-owner of Shadow Horse Theater, where he helps produce A drinking game MN. Beyond producing, he has been seen on stage most recently as Oberon in Midsummer Nights Dream. He has had the pleasure to entertain audiences with his roles as Bigby from Trainspotting, Lenny in Clive Barker's Crazyface, Mr. Much in American Midget, and the Voice of Raguel in Neil Gaiman's Murder Mystery. He also performs with Last Action Movie, a local improv troupe that has graced the stage around the country and Canada. Along with improvisational theater, he is also part of Masq: A half mask comedy, where he gets to wear masks and entertain with silliness. Matthew has also worked on a number of film projects with Killing Joke Films.

Adri Mehra
Lt. Robert Maynard
Adri has entertained audiences in over 50 theatrical productions since 1999. He has performed at many local theaters: Hook and Ladder Theater, Crane Theater, Phoenix Theater, Strike Theater, the Capri Theater, and the Rarig Center Theatres where he portrays Lt. Robert Maynard in "Blackbeard's Revenge" as part of the 2017 Minnesota Fringe Festival. Adri is pleased to be working again with his friend and colleague, Paul von Stoetzel.

Nichole Carey
Morah - Vocalist
A cabaret singer based in the Twin Cities, Nichole is thrilled to be playing again in the MN Fringe Festival! She has been seen performing at many well-respected local music venues including: Honey, Jazz Central, Studio 2, Vieux Carre, and the Dakota Jazz Club. This past April, Nichole made her NYC debut at the Duplex in Greenwich Village, and will be making her Chicago debut at Davenport's this September. She is also a published writer and producer, having created and starred in several musical revues at the Bryant Lake Bowl since 2011. She is a member of the Twin Cities Cabaret Artist Network and an alum of the International Cabaret Conference at Yale University. To follow Nichole and sign up for her email updates, check out more information at www.nicholecareysings.com

In 1997, founded a non-profit organization called Promote Awareness. Promote Awareness' mission is to promote the Abilities of people with disabilities. Graduated from the University of Minnesota with an M. Ed. in Human Resources Development. Has worked with Dance Instructors Gretchen Pick, Justin Jones and Marie Tierney.

Tony Dodge
Doc - harmonica/guitar
Prior to the Roundabouts, Tony was a member of Lake Street Ramblers and performed with The Silverteens and Friends. He has since played drums with The Pigeons from Hell and currently plays bass guitar with The Problematics and guitar, harmonica, and Farfisa organ with Tony, Tony, and the Other Guys. His "real" job is conducting microbial biotechnology research at the University of Minnesota and for Minnepura Technologies, SBC. Someday Tony will be our new Jeopardy champion.

David Gullickson
Vid - percussion
David has been playing drums in bands since the late 70's. Some of his past associations were with Wilma and the Wilbur's, Cold Truth, Vendetta's, Kindergarten, DKV and Invisible Jazz. David is also the only member of the band who can grow a proper beard. He could buy a trucker cap and work in a brewery.

Tony Pulver
Slim - banjo
For Tony it all started errant click during the early days of the internet, which resulted in a banjo been delivered to his doorstep. He faced a dilemma; learn to play the banjo or waste the money. Much to the dismay of his cats he picked up the banjo and the rest is history. From there he branched out to guitar, dobro, pedal steel, ukulele and bass. Prior to the Roundabouts, Tony played with the Lake Street Ramblers, Tony, Tony & the Other Guys, and Pulver & Ryan. At any point in time, Tony can tell you where to get the best burger in town.

Marcus Wellhoefer
Naval Seaman - Jack
Marcus is a young actor, singer and all-round entertainer under the tutelage of talent coordinator, Lee Jordan. He was one of the Rainbow Valley townsfolk in The Park Theater Company’s 2016 production of Finian’s Rainbow.

Erin Green Vita
Stage Manager
Erin is pleased to make her Fringe debut with this production of "Blackbeard's Revenge. She has been freelance stage managing across the Twin Cities for the past 7 years most recently with Chameleon Theatre Circle, Lakeshore Payers and Segue Production. Other theatre's she has worked with include: Theatre in the Round, Morris Park Players, and Lyric Arts. She received her BA from Concordia College, Moorhead for Communications and Theatre Arts.

Tim Colby
Set Designer
Tim is a sometimes actor...but usually can be found designing and creating sets for various Fringe productions and The Park Theater Company since 2013. Along with his life partner, Robert Yarwood, ... Tim has created Blackbeard's Cabin in the Queen Anne's Revenge from recycled wood found curbside and in dumpsters around town. "Banged-up wood seemed the proper aesthetic for a pirate ship. If the wood fits ... sail it!" Tim said.

Joel Raney
Dialect Coach
Joel is a native of Brookings, SD. He served in the U.S. Army as a medical specialist before graduating with an English degree from South Dakota State University. He currently works at the American Indian Magnet School in Saint Paul. His stage credits include Theatre in the Round, Shadowhorse, Bloomington Civic, Fortune’s Fool, Footprints Collective, Paul Bunyan Playhouse, Park Square, nimbus, The History Theatre, Freshwater, Workhouse, and Theatre Pro Rata. He has served as a dialect coach for Chameleon and Theatre in the Round and has performed in short as well as feature films.

David Schneider
Armorer
David has been performing in the Twin Cities since 2001, ranging from musicals to Shakespeare to experimental theatre to dance performances to pure fight shows. He continually trains in Stage Combat, which he performs, choreographs, and teaches. He has recently launched his own weapon rental and maintenance business, Northern Edge Armory. He has specific interest in movement-based theatre, especially with violence: need a choreographer? a few weapons for your soldiers? a training program for your students? Contact David – he can help.

Paul von Stoetzel
Director
Paul is a member of the Shadow Horse Theatre and has directed over 40 short films/music videos and as many plays in the Twin Cities area including working with Hardcover Theater, Gadfly Theatre, Comulent Shakespeare and Urban Samurai. He is very excited to return to the Fringe directing both "The Tragedy of Obi-Wan Kenobi" AND "Blackbeard's Revenge".

Seamus McDonagh
Playwright
Seamus McDonagh is the nom de plume of Jim McDonough Jr., Ph.D. He co-founded The Park Theater Company; generated over $75,000 for TPTC’s productions; was TPTC’s Producer of Axel and His Dog (2010), Our Town (2011), The King of the Kosher Grocers (2013), The Illusionist: Shakespeare Reveals All (2013), The Forger’s Apprentice—The Musical (2015); wrote, produced, directed Buffalo Child (2016) and directed and starred as Finian McLonergan in Finian’s Rainbow (2016). His "Blackbeard’s Revenge" is the culmination of over three years of reading and research and weaves together a historical tale which is riddled with more questions than answers. His impetus for the project was the factual information concerning the choice of a life of piracy as a result of the cruelty of the British Navy and the form of egalitarian democracy epitomized by the pirate brotherhood.